On Saturday, September 12 the Shark Cross Country teams ran a strong race at the Bulldog Invitational. Rafael Lopez placed 2nd and Daniel Sam placed 8th in the boys division.  Adriana Wong placed 6th in the girls division.  This is the third year that Adriana Wong has competed on the cross country team.   “This meet was pretty good for it being the first of the season and I believe that this season will progress for both the girls and the boys teams,” said Wong.

When asked if Coach Marshall believed that her teams would be as successful as last year, she said, “it will all be up to the team’s work ethic, drive, and determination. If the athletes want it, I have no doubt they will put up a fight to earn it!”  The Lady Sharks and Shark Cross Country teams have been training for each individual race and expect to work towards their goal of District Champions with every race. 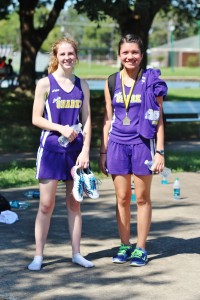 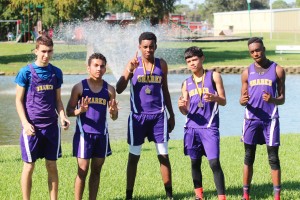 Many Sabine Pass students are thrilled to have cosmetology as a new course in their schedule. Cosmetology classes focus on the knowledge and application of the principles and the treatment of skin, hair, and nails. Keeping up to date with hair trends is very important. Hair extensions and Brazilian Blowouts are popular now and cosmetology students are interested in learning about hair color and nail services. Students in 10th, 11th, and 12th grade are prepared to learn as much as they can about the beauty industry.  Once students have taken the course and worked many hours, they are allowed to have customers.  Ms. Gonsoulin plans to have the Cosmetology Salon open to the public by January.  She has been in the beauty industry since 1996 and has a lot to offer the brand new program. Her goal is to make sure that her students are prepared for the State Board Exam and have the opportunity to have a successful career.  In order for the students to obtain their permit, they must complete 1,000 clock hours.  She plans to keep the Shark Cosmetology program going for years and expects new students who are interested each year.

The Lady Sharks are on fire this season! Varsity holds a total of 6 wins out of 8 games, while JV has won 3 of their 5 games. Coach Bates and the Lady Sharks have high hopes for reaching the playoffs this year.  The rules have changed for making it to playoffs.  The top four teams in district advance to playoffs. “We are working on being more aggressive as a team through hitting, blocking, and serving,” says Coach Bates. The Lady Sharks are playing against challenging schools like High Island, Goodrich, and La Marque, but our girls are a tough team to beat!

When it comes to crucial moments during a game, players often look to their fans for support.  The sound of a roaring crowd can lift the spirits of players or help them stay motivated to play their best.  Sabine Pass students are and staff members are hoping to create an organization for that reason.    Before the first football game, students were invited to help fill the stands and cheer on their team.  The journalism classes offered a prize package consisting of a free yearbook and a gift certificate to the concession stand to sweeten the deal.  A future pep squad is likely to be organized for home football games to help the cheerleaders get the crowd pumped up at games. The pep squad would be a great accessory to all the sporting events at Sabine Pass to help cheer teams to a victory.

On Wednesday, September 16, Sabine Pass Middle School started their first virtual UIL meet. This is a new event for students and teachers in grades 5-8.  Many of the teachers were happy to have the opportunity to begin working on their teams.   “I was able to get an idea of which students truly excelled in Social Studies really early this year,“ said Mrs. Guidry.  By forming teams earlier, students have more time to work together and prepare for their main UIL contest.  Mrs. Carter is preparing for her UIL virtual meet next week, but believes that it will be a huge success.  “It will generate a larger interest in the UIL competition that will be held in December.  Students are already getting excited and practicing for the competition,” said Mrs. Carter.  Sixth graders, Brayden Blacketer and Ashley Vega, both agreed that although it was challenging, they had fun. Eighth grader, Karen Magana, was surprised when she found out that she was good at science.  Fifth grade students will take part in their virtual meet next week. The middle school and elementary teams will definitely be prepared for the UIL meet hosted by Sabine Pass School this December.

The new year has kicked off and the Sharks have been getting pumped up for athletic events by attending pep rallies. The pep rallies have been a little different this year compared to previous years. Lindsey Pate “feels like they have been more engaging and the speakers have been great.” The new additions to Ships and Sailors made last week’s pep rally more entertaining. However different they may be, the pep rallies are still fun and get people excited for the games. Football player, DJ Miguez, gets excited by seeing “[his] fellow teammates getting pumped and focused so naturally [he] gets [his] adrenaline pumping.” Senior cheerleader, Bryanna Angelle, says that “getting more people to yell and cheer along with us will make the pep rallies more fun,” instead of just using them as an excuse to get out of class. The pep rallies also include a variety of games to get maximum crowd enjoyment. Alondra Medina says “it was fun running and getting dragged around to try and win,” when talking about Ships and Sailors. All around, the pep rallies are a good way to get the crowd and the players ready for the game.

On Thursday, the middle school sharks football team took on the Hull-Daisetta Bobcats in their first football game of the season. Although the team lost several players to high school, they have welcomed many new 7th and 8th graders to the team. ” I am expecting the team to win though we have been short on players, but what we do have is a lot of heart. We have been preparing for the season by putting our best effort in practice. As a team we have improved offensively and defensively because of our determination and team effort. We are going to work hard and have a good time while we win!” said 7th grader, Grayson Johnson. The players are not the only ones who are excited to see the season begin.  7th grader, Jaeda Bryant is ready to show support for the team.  “The cheerleaders are excited to finally be able to cheer on our football boys,” said Jaeda.

College is an important subject to many students long before their senior year of high school.  We interviewed several sophomores and juniors and found that many have already started planning their next step in education. Silvana Ochoa stated“ I don’t know what college I am going to attend yet, but I plan on staying in the United States.” She plans on studying animation and computer engineering. A few students know exactly where they will be in a few short years.  Adriana Wong, a Junior, is excited to one day attend Lamar University. She is  planning on “studying to be a coach/teacher.” Leonard Ifield is planning to attend the University of Texas in Austin and is trying to pursue his career in mechanical engineering.  There are many other Sabine Pass students who are looking forward to the college or already have a plan for continued education.  They are looking forward to making their college dreams a reality.

Middle school students and teachers are very excited to be going one-to-one with Chromebooks this year.  Each middle school student was issued a Chromebook at the beginning of the school year.  Students are completing and turning in assignments online, with the help of their new technology.  Teachers are excited about the decrease of papers to copy, as they can electronically send students study guides, worksheets, and more.  “Although it has been challenging to modify students’ assignments into an electronic format, middle school teachers are embracing the change and are thankful for the technology available to our students.  Technological skills are vital in the real world, and we are happy to be preparing our students for the future.  From navigating Google Classroom to improving their typing skills, middle school students are doing a great job adapting to the change as well”, says Mrs. Deslatte.  Mr. Simmons and Mr. Hagedorn have been crucial to helping middle school students and teachers successfully integrate Chromebooks into their daily classroom activities.

You can now buy your yearbook online using the link below!  Please contact Mrs. Guidry if you have any questions regarding the 2015-2016 yearbook.